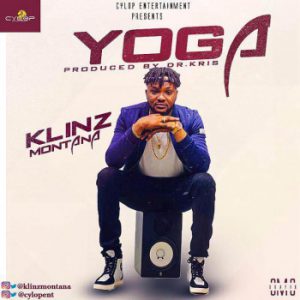 Cylop Entertainment finest Klinz Montana releases a brand new single titled ‘YOGA’. After an impressive run with his award winning song ‘IBINABO’ which featured top ‘A -list’ artist TIMAYA, this emmersed massive airplay both on radio and Television nationwide. YOGA (Your Own Godgiven Asset) is a club banger tipped as a potential song for d year. YOGA was produced by Cylop Entertainment In-house producer Dr.Kris, mixed and mastered by award wining INDOMIX. First ever single released by Klinz Montana was “Rock The Microphone” co-produced by Dtunes in 2015.