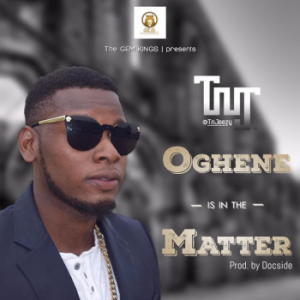 ‘Truly Truly I say unto you’ #OgheneIsInTheMatter … Cuz’ Nigerian Christian Rap Music is about to get a facelift. His name is “TnJ” aka The Gem King; he’s no new comer to the game, but this offering right here, his official debut single, is a game changer.

The single titled “OGHENE IS IN THE MATTER” which is off his forthcoming EP [Hip Praise Hop Worship] is an audacious attempt to not only redesign the stereotypical view on Nigerian Christian music as a whole, but also to do so partly in his mother tongue (Urhobo). In an industry where the Yoruba & Igbo languages hold sway when it comes to indigenous offerings, TnJeezy the acclaimed ‘Kingdom Warri Boy’ goes ahead to testify that “Oghene (GOD) Is In The Matter”.

The song produced by DocSide for DocSide Theatres (Producer of Ex-BBN housemate, Ese Eriata‘s debut single) is said to have started a movement especially in the Southern parts of Nigeria. The ‘Hip Praise Hop Worship EP’ by TnJ, is set to be unleashed before the 3rd quarter of 2017 & one or two more singles are expected to drop before then as hinted by his management, The Gem Kings.


TnJ also wishes to use this medium to celebrate his kid sister who was born today, the 9th of April. From all of us, we’re saying “Happy Birthday Voke”.