Controversy continues to rage on following the release of an X-rated video which 19-year-old Miss Anambra 2015, Chidimma Okeke, engrossed in explicit S3x with her Lesb!an partner. 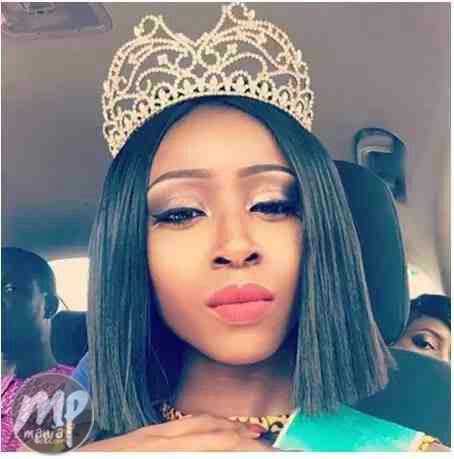 According to reports, the embattled former queen’s attempt to explain the story behind the video at a press conference organised by her lawyer was truncated when reports reached the organisers that those who had leaked the act would invade the venue and kill Miss Okeke.

Since then, speculations had been rife across the state that the leaked video might be a set-up while others have blamed the organisers of the pageant in the state for leaking it to the public.

The Accounting student at Nnamdi Azikiwe University (UNIZIK), Awka, was not interested in contesting the crown. The Nation gathered that the innocent girl was later “lured” into the competition by some unnamed persons.
According to sources, while she expressed concerns about her poor background, she later changed her mind when she was told that she would make her people proud if she was made the queen. She was also promised all the goodies associated with the competition.

One of her friends, who pleaded anonymity, said:

“They bought the form for her to fill, which she did. And surprisingly, she was announced as the winner of the contest. What has happened is unfortunate.”

However, there have been several versions of what might have transpired to culminate in the leaked X-rated S3x video. A version claims that the organisers of the competition might be the brains behind the scandal while another version claims that the beauty queen had been into Lesb!anism with her group for a long time; a claim that is gaining ground across the state.

Yet another version says she might have been influenced by one of her ex-boyfriends, who may not be comfortable with her rising profile.

Among the agreement Miss Okeke allegedly signed with the organisers of the pageant, the state owned Anambra Broadcasting Service (ABS), was that she would relinquish her official Kia  Rio vehicle at the end of her reign.

However, one of the intrigues of the evolving story is that most of her rights as queen, including her official vehicle, were withdrawn from her before the expiration of her reign yesterday.

The Nation also gathered that the beauty queen was allegedly kidnapped at one of the eateries in Awka by an unnamed top politician a few days before the video hit the streets.

A source also alleged that the video was shot before the 2015 beauty contest, where it was alleged that certain amounts of money would be released to the alleged blackmailers from time to time.

Investigations by The Nation showed that the prize money for the pageant was one N1 million. She was said to have been paid the sum of N500, 000 with a cheque soon after she was crowned, and later paid the sum of N50, 000 monthly.

Already, lawyer to the beauty queen, Ikenna Obidiegwu, has raised the alarm that the life of his client is under threat by unknown gunmen.

But Obidiegwu told reporters that the blackmailers of her client would be made known soon, adding that one of them was a top politician.

However, he debunked claims making the rounds that the beauty queen had been smuggled outside the country to Ghana.

He said Chidimma Okeke was passing through a very trying phase in her life, while calling for prayers from Nigerians to help her scale through the difficult period.

A text message sent by the embattled queen through her Facebook page reads as follows:

“The moment I made public this intention to speak with journalists, I have been under siege of threats by my blackmailers and traducers.
“They are seriously threatening to shoot me at the press conference if I ever open my mouth to say the real truth about the ugly episode.
“Since I have no protection, and if I die now the truth will be buried forever, it’s my intention to sacrifice myself to save not just myself but other girls and other upcoming pageants by letting the world know the truth and what we go through.”
But her explanations may not have been enough to douse the raging fire started by the video. Most of those who spoke with our correspondent are worried that despite her efforts to explain the mystery behind the video, the former beauty queen did not deny that the video had nothing to do with her.

“I pity her and I wish she would come out to let us know what really happened. But that does not take away the fact that she appeared in that ugly video. And until she comes out to tell the world that she was not the one in the video, her reputation remains at stake,” a worried mother said.
Meanwhile, the organiser of the pageant, the Anambra Broadcasting Service (ABS), on Thursday, came out to dissociate itself from the S3x scandal.

Already, the 2016 pageant has been postponed indefinitely by the organisers.

Checkout the crazy revenge this girl pulled on her cheating boyfriend

Cucumber Video: Chidinma Okeke finally tells her own side of the story