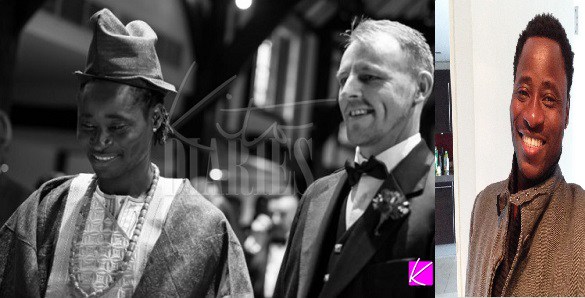 Bisi Alimi, a Nigerian gay rights activist is back with an advice for Nigerian women who are married to men who love men.

Sharing a screenshot of an account of a lady who was once married to a gay man, Bisi Alimi told Nigerian women that there is nothing once can do to stop a man who loves men from keeping up with such life.

“Stop press!
Dear women, I have said t before and I will say it again, if the man you are with loves men, pack your bag and move on. There is nothing you can do to stop a man who loves men from loving men. Staying around will make you sad and make your life hell.
This is a special message to Nigerian women, stop trying to make a marriage work with a gay man, no matter what he promised you, he will always go looking for the companionship of a man, and that’s the reality. Same goes for men who are married to women who love women.” 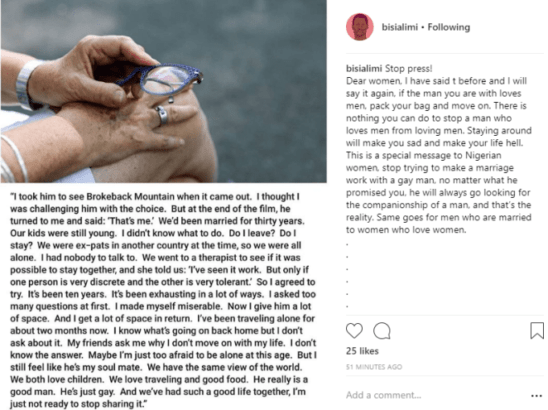 Bisi Alimi had before now, disclosed that he has no pity for straight women who get married to gay men.

According to him, as long as they keep supporting homophobia and patriarchy, they will keep marrying gay men.

“You either speak up against the atrocities, or keep being the victim,” he added to further drive his point home.

This was in response to the viral story of a woman who got married to a gay man, without knowing he loves men. Relating her experience, she wrote:

The weeks before my wedding were filled with all sorts of skin treatments, consumption of aphrodisiacs and vaginal steaming all in anticipation of the big night. I looked forward to consummating our love on that special night.

On that special night, when all the glitz and glam of the wedding was done, it was just the two of us. I was so nervous and excited but Hamisu did not look interested. We talked for a while and then he fell asleep.Yes! My husband fell asleep on our first night. I did not know what do, whether to wake him up or to allow him sleep. I couldn’t hold myself I had to wake him up.

‘Honey, I don’t think we should be sleeping tonight. It is our first night, it is the Sunnah.. He cut me off with a kiss and we made out for a while; then he told me he couldn’t do anything that night because he was so tired from the activities of the wedding. Fair enough… so we slept off.

Two weeks later we were still sleeping together…that is we were only sleeping. At this point I became fed up. No matter how hard I tried to get him in the mood my husband did not seem interested in making me a woman. He would rather go to sleep.

Three months after my wedding and I was still a virgin. My husband was not interested in that part of our marriage though he was a wonderful husband in other areas. He was very supportive of my career, he took care of me, he cooked and cleaned up after himself, he made me laugh, he was affectionate but that was the end of it… after a while I gave up trying.

Founder of The Boob Movement, Abby Chioma Comes Out Gay, Shows Off Her Partner…