Man Murders His Stepfather with Pestle Over Cake Dispute 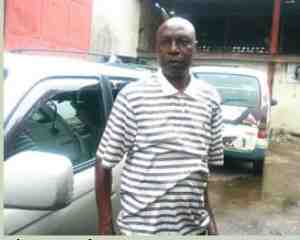 “A young man is currently at large after murdering his step-father in cold blood under highly controversial circumstances.”

The police in Lagos have launched a manhunt for a 30-year-old man, Seyi Okanlawon, for allegedly clubbing his stepfather, Alex Momoh, 63, to death in the Ilupeju, Mushin area of Lagos State according to the Punch.

It was learnt that Seye hit the victim with a pestle in the head and leg after a disagreement over a cake made by his sister, Moyo Okanlawon. The incident happened on Railway Line, Ilupeju, Mushin area.

It was learnt that the deceased, who worked as a driver in a cosmetics company, had eight children from three women, before marrying his fourth wife, Lola. Lola also had had four children from a previous marriage before marrying the Edo State indigene. Among the children were Seye and Moyo, who were both married.

Moyo, however, moved into the Ilupeju residence of the Momohs after her husband’s apartment was reportedly demolished. Trouble started on Wednesday after Alex reported to Lola, a trader, that Moyo had placed a piece of cake on his bed where he wanted to sleep. Moyo, in turn, reported to his brother, Seye, who was on a visit at the time.

The suspect was alleged to have grabbed a pestle with which he hit the victim in the head and leg. Alex was said to have passed out as blood drained from his body. The victim was later rushed to the Lagos University Teaching Hospital, Idi Araba, where he died.

The matter was said to have been reported at the Ilupeju Police Division. Osagie, 19, one of the children of the deceased, said the incident happened around 7pm. Seyi Okanlawon bolted after the crime and his whereabout is currently unknown.