Meghan Markle “loves” the fame and adulation of being a member of Britain’s Royal Family, an estranged family member claims. 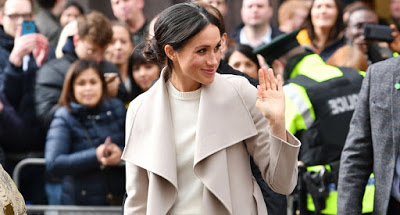 It comes after Meghan, 37, and husband Prince Harry moved to the Queen’s Windsor estate to have more privacy and announced the birth of their first child will be kept under wraps at first.

The couple recently launched their own Instagram account – which now has 4.5million fans – and announced they are teaming up with Oprah for a new documentary series on mental health.

Mr Johnson, the half-brother of Meghan’s mum Doria Ragland, 62, said the Duchess – who is fawned over worldwide – “loves” all of the attention she has been getting.

Being an actress helped to prepare her for the fame, he added.

Duchess Meghan opens up hoping the public would give her a…

The spotlight will become even more intense once she gives birth to the Queen’s newest great-grandchild soon.

Mr Johnson, 69, told the Daily Mail: “She likes that attention, she’s had the schooling, and then being in Hollywood, which is a good type of preparation, so she can handle that.

“I have read that some of Harry’s old girlfriends couldn’t handle all the scrutiny. But from what I hear, from what Doria says about Meghan, she loves it.”

He added: “That is great because that’s certainly a huge part of it [her new role]. The public eye.”

Mr Johnson rejected reports about the Duchess, saying she is a “wonderful” woman who isn’t afraid of being herself.

He suggested Meghan, raised in a household dominated by independent women, would be “more comfortable” with a baby girl and a boy would be “more of a challenge”.

Mr Johnson is an artist who lives in Fresno, California, about 200 miles from where Meghan grew up in Los Angeles.

NUPENG tells Nigerians to stop the ‘Panic Buying of Fuel’

Prince Harry and Meghan visit the oldest mosque in South…