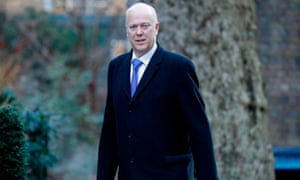 The government has settled a court case over the Brexit ferry fiasco by reaching a £33m agreement with Eurotunnel, which was suing it for giving a company with no ships a contract without having first put it out to tender.

The out-of-court settlement led to immediate calls from Labour for the transport secretary, Chris Grayling, to be sacked for “routine incompetence”.

Grayling said he was disappointed Eurotunnel had taken him to court over contracts to “ensure the smooth supply of vital medicines” in the event of a no-deal Brexit, but that the £33m agreement would help ensure the NHS now had those medicines.

Under the agreement, Eurotunnel will “improve security and traffic flow at the border”, including investing in improved access to the UK terminal, in exchange for dropping the court case.

Eurotunnel sued after Grayling awarded a £14m contract for a ferry service in the event of a no-deal Brexit to the start-up firm Seaborne Freight on 28 December. Two other contracts worth £108m were awarded to the established operators DFDS and Brittany Ferries.

Grayling said the settlement meant the existing contracts with Brittany and DFDS for emergency medical supplies could be protected.

Grayling’s decision to award the contract attracted criticism and ridicule after it emerged that Seaborne had no ships and no contract with the port of Ramsgate and that the original terms and conditions on its website appeared to have been cut and pasted from a food delivery firm.

Labour’s deputy leader, Tom Watson, tweeted that the settlement was “a scandalous, needless, reckless waste of public money caused by the Tories’ gross failure in Brexit negotiations and their botched effort to prepare for the disastrous folly of a no deal … Heads must roll.”

The shadow transport secretary, Andy McDonald, said: “[Grayling’s] conduct as a minister is one of serial failure and routine incompetence. In any other sphere of life he would have been sacked long ago. I say yet again, this trail of destruction has gone on long enough. It’s time for Chris Grayling to go.”

He pointed out that the settlement came on the same day that a National Audit Office report showed “disastrous decisions by Chris Grayling at the Ministry of Justice have wasted nearly half a billion pounds of public money”, and two days after a public accounts committee report detailed his “mismanagement” of the railways.

The Labour party later claimed that decisions made by Grayling in various departments had cost the taxpayer £2.7bn, including £2bn for the cancellation of Virgin’s East Coast rail franchise and £800,000 for consultants’ fees to assess the viability of Seaborne.

Downing Street insisted Theresa May continued to have confidence in Grayling. A No 10 spokesperson said he was involved in “some very important projects and work, including massive investment in the railway network and in securing backing for a third runway for Heathrow”.

Eurotunnel argued that the government had breached public procurement rules by not putting any of the contracts out to tender. It is believed that one of the factors leading to the settlement was the prospect of the background to the contract becoming public.

Grayling was accused on Monday of trying to conduct large parts of the trial in private, against the principle of open justice, the high court heard. The judge ordered Grayling to return to court by close of business on Thursday with justification for keeping up to 10,000 documents relating to the contracts private.

It is believed the case was settled out of court on Thursday afternoon and all files now remain sealed and unavailable for press or public scrutiny.

The Department for Transport’s permanent secretary was forced to admit last month that it had verbal assurances rather than a written guarantee of secure financial backing before handing Seaborne a £13.8m contract.

The government said in a statement: “As part of the agreement, Eurotunnel has also withdrawn its legal claim against the government, protecting the vital freight capacity that the government has purchased from DFDS and Brittany Ferries.”

The out-of-court settlement has been combined with a £33m deal with Eurotunnel to provide freight capacity for transit of medical supplies in the absence of a Brexit deal.

Eurotunnel said the settlement would “ensure that the Channel tunnel remains the preferred route for vital goods to travel between the EU and the UK”.

It had previously expressed bewilderment that a government contract had gone to a company hoping to reopen a disused ferry route when it had offered extra freight trains in private consultations with the government on no-deal planning.

It added that under its deal with the government, “the development of infrastructure, security and border measures … will guarantee the flow of vehicles carrying urgent and vital goods and … will keep supply chains essential to both industry and consumers moving”.

Downing Street said the decision to settle out of court with Eurotunnel was a “cross-government decision” and had been taken “to ensure that vital goods would not be put into jeopardy in a no-deal scenario”. The settlement “allows us to continue at the job at hand”, including measures to ease pressure at the border with France in the event of a no-deal Brexit, the spokesman said.