The Saudi-led coalition carried out air strikes in Yemen against two Houthi targets in Sanaa, the capital, its spokesman said on Wednesday. 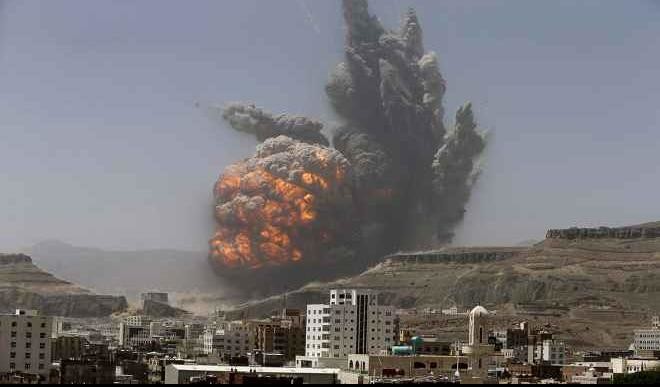 The coalition said the strikes targeted a Houthi drone-manufacturing plant and a warehouse containing launch pads.

Residents said a house was also hit, however, no casualties were reported.

Saudi Arabia leads a Western-backed alliance of Yemeni and Arab forces that have been fighting the Iran-aligned Houthi movement in neighbouring Yemen since March 2015.

This was after Houthi forces drove Yemeni President Abd-Rabbu Mansour Hadi into exile; the coalition is fighting to restore Hadi’s internationally recognised government.

The Houthis, who say their revolution is against corruption, control Sanaa and most population centres.

The strikes hit the al-Jeraf neighbourhood in north Sanaa.

Houthi-run Masirah TV said a fire broke out in a plastics factory as a result of the air strikes.

The UN has said that a blast in Sanaa near two schools on Sunday killed 14 children and injured more.

“It was almost lunchtime and students were in class.

“The blast shattered the windows and unleashed a burst of shrapnel and broken glass into the classrooms,” said Geert Cappelaere, UNICEF’s Middle East head.

It is unclear what caused the blast and UN Yemen aid coordinator Lise Grande called for efforts to pinpoint the circumstances “that led to this tragedy”.

Yemen’s war has killed tens of thousands of people, some of them by coalition air strikes and driven 10 million to the brink of famine.

The country is also suffering its third major outbreak of cholera since the conflict began.

A peace process that began with a December agreement has stalled and, although a ceasefire largely holds in Hodeidah, Yemen’s main port, violence continues elsewhere and has escalated in recent weeks.

The UN is trying to get the parties to pull troops out of Hodeidah and complete a prisoner exchange, two confidence-building measures which could pave the way for further talks.

Kirikiri: Painter Jailed for stealing a Television in Lagos