Publisher Theme
Art is not a luxury, but a necessity.

A documentary targeted at lecturers in some West African universities harassing their students for sex in exchange for grades/marks, was released, on Monday, October 7,  by BBC Africa Eye. 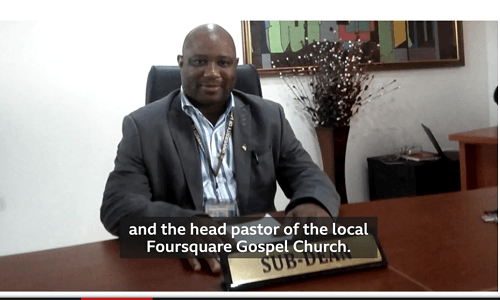 It was disclosed that female reporters were sexually harassed, propositioned and put under pressure by senior lecturers at the institutions – all the while wearing secret cameras in a 13-minutes video documentary released.

A UNILAG senior lecturer, Faculty of Arts, who doubles as the head pastor of a Foursquare Gospel Church in Lagos, Dr. Boniface Igbeneghu, was exposed as one of the culprits.

The undercover journalist posed as a 17-year-old student who wanted an admission at the University of Lagos. The “student” endured a couple of sexual harassment from Dr. Igbeneghu.

Igbeneghu, who invited the teenager to his office for a number of tutorials, subsequently began to have inappropriate conversations with her. On their first meeting, he commented on her appearance.

Igbeneghu told the girl on camera that: “Do you know that you are a very beautiful girl,” he asked her. “Do you know that I am a pastor and I’m in my fifties. What will shock you is that even at my age now, if I want a girl of your age – a 17-year-old, all I need is to sweet tongue her and put some money in her hand and I’ll get her.”

Watch the video below: