Listen, Download Mp3, get Full-Text Lyrics & Watch the video to Martell Cypher 2 (The Purification) by M.I Abaga, Blaqbonez, A-Q & Loose Kaynon. The song was produced by Beats by Jayy and its Video directed by Slick City Media and Director Tyla. 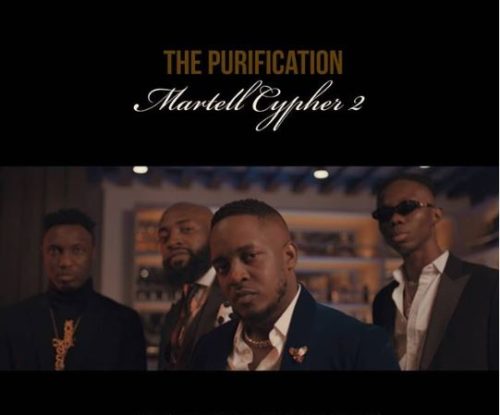 Chocolate City in collaboration with Martell, 100 Crowns and TASCK presents the Second Edition of the MARTELL CYPHER 2019 (The Purification) featuring rap heavyweights M.I Abaga, Loose Kaynon, A-Q and Blaqbonez. This edition is even crazier than the first go-around! (If you missed the First part just click HERE to Listen)

The theme for this “Martell Cypher 2” is ‘The Purification’ with M.I Abaga saying ‘We apologise on their behalf…so we return to purify our industry”.

The production credits go to Beats by Jayy (@beatsbyBDJ) who also produced the first edition in January.

[Verse 1: Blaq Bonez]
Aye Yeah
Best Rapper in Africa yeah I’m really Popping
Niggas really asking why I’m being so cocky
You should ask your sister why I’m being so cocky
And your mom’s coming late, blaming that shit on traffic
Heard a lot of niggas dissing I ain’t feeling much
Coming near me for having the shit that I been wishing for
It’s like Miley telling Kim Kay that she ain’t taking off
Like Lil Pump telling Jay to get this money up
Y’all need me down Y’all talking to me by royalties
Can no paper do so they come at me Uncovered beats
Now I’m freaking swift so clearly they doin’ off fully
When ma one track is your own fucking [?] fee
Nothing in a pack is the one they’d be so hard in parking
That is so in vain don’t fuck around please do that in profit
Oh you get the president involved like Kese Brockey
No competition no, whose the men invented whose the after party?
Every movies planned and my shit going accordingly
Your move is the way for my move I get it honestly, bruh
In all these face you are searching for hype
Imagine face I get vain dye get codeine on the side
Why I’ll be shitting on these rappers
All my vows be like puddy brakes
We configured they faces make he hard not to body shame
Someone asked me why I gave a tension when it’s fucking hay
It’s like driving got a local dummies when you overtake
Looking in the face cause I’m done with that stupid talking yeah
Your favs gon’ beat me, Nigga put your money on it
Walking to the six foots sleeping bruh, I ain’t backing down
Headlines, Mystery rapper is now underground
Shut the fuck up, do you know who you’re talking to
I’m a lion, I’m a beast, like cheetah my shit gone zoom
I’ll be dog, and then my stripes to tiger the way I move
Am way bigger than you niggas think Elephant in a room
Whatsup

[Verse 2: Loose Kaynon]
I heard the young in cloud chase is of the last cypher
I dey tape, you punchlines, you’re a typewriter
Y’all claim dope but where’s the flame you’re a bad lighter
This one na inside life as far as bars and I’m a lifer
They keep tryna pull me back, I play hardest now
They has to gossip for free you call is wow
Couldn’t believe tho
I stopped rapping for free show
Y’all been having chips in the bag telling no free does
This niggas lucky I’m pages of bitches twerking my niggas walking in stages state of money always bringing groping
Told ya the brakes failed on this train we never stopping
See 100 pounds of pain relieved ma pocket have been hurting
You talking cash I’m a [?] hopeless one
I won’t stop until I’m burning it like — son
So what’s your focus son
You got your lines in a — I get pencil with my families has to worry about expenses
Your Uncle’s benzes, my uncle is used to brokers, yesterday tenses, build bridges, y’all building fences
I’m the man you’re the bunch of fucking [?]
You start [?] make my benches cause I’ll remind you that this year is ten years of fucking broke
Watch your mouth rookie, bars still can fuck your fav still can’t cook me
This year sure, bet you should listen to the bookie
And black told me last year, this year don over book me
So now you too they fingers, concerning like building singers, every time they keep the livers
Y’all go crown, million rivers
We in the house of every thing is for sale
But if you want the smoke we did hang for back like Pony Tail look
If you can tell him VIP ma tell him discussing his back swelling you just tryna bring your dell, I’m telling
Y’all talking sleep behind his bars y’all fake fellas
Y’all give the rose in hand on the bus and start rebelling
Uh! This is the moment yeah I’ve been waiting for
They hatin’ uh, y’all give em head you sucks why’re your masturbating for?
Lemme me get back to the deals speech y’all keep taking the shits like [?] switch up

[Verse 3: A-Q]
Best thing since Slice Bread and Slice of Pixar
The worst thing since Domino’s pizza and Monalisa
Rappers use issue as junk food
Generated like meals from Chicken Republic
And we be brothers
First thing girls do is to love it and then is fuck it
Like rappers never stick to the topic we live in the tropics so
When I rap it sticks if you rub it together you can candle the fire
Love letters to the girls I admired
They let us became lyrics, the music became buyers
The situation required the almighty formula
So I’mixing numbers with letters and it’s looking like OG bruh
Do the maths I got the masters
Fuck you and your masters
Your masters ain’t watching and it won’t a hundred years after
A hundred years a slave on a slave ship to Alaska
Yeah, riding same ways that makes the white man your master
Before Independence and Awolowo became distinguished
Before the colonization by the British I had seen this
They studied the genetics of the Nigerian spirit
The biology of Kings, the evolution of my kingship
Before the introduction of English or you could reach it
I’ve been spitting in Linguistics with the flow that’d sink ships
Anybody wey go do ham like me Omo na film trick
When I see rapper, I see food and I eat them up until I’m seasick
I had a place to be between Yemi Alade legs
So I’m constantly mad cause my shorts hit the neck
Yeah, Junking rapper sending threats
Draw the line
Put it on the table is the only place to Draw the line
Underground all the time now I know the dollar signs
Two heads are better than one
About a thousand average times
About getting the don, Plans are organised Disorganized crime is that yahoo life you immortalize
Fuck Buha
Fuck till I left out no words
But of course I don’t want DSS at my door
Haters been shouting “Jesus”
Your favs are catching seizures cause I ‘x’ them out like I did with them Roman Figures
Roman catholic, the rosary is always close to me
The fact you can see them all the verses are [?]
[?] My class, that’s a no degree
Disrespect my hardest game then I put an hold in me
Fuck the radio show
We all know they tryna over sea
Fuck the new music Im still having sex with Jordici

[Verse 4: M.I Abaga]
So Y’all paint the cypher here
We don’t get any appreciation
Well let’s call it charity
Poverty alleviation
And Y’all [?] ’cause it was like an economic forum
Or like an oil [?] my nigga, that shit was boring
Hi there, yes, I heard you talking
I’m Big Brother I’m always watching
Let’s discuss your actions
Shut the fuck up let’s get to boxing
Nobody close to dude that to stop him will tell him to get a coffin, yeah
You’ve been steady curving and swerving like scribbling eggs
But I observe dinner and served in your dinner play you hungry
Then you ready it could be a size make you fit
I think you checking though ’cause chickens are on the line with the hen
I made it safe for y’all in 2008
But all I see from all ya rappers when I’m browsing is hate
But I’ve been so accommodating like a house in estate
[?]