Majority of Nigerians in a Twitter poll have voted for the prompt arrest of Patience Jonathan and her husband, Dr Goodluck Ebele Jonathan over allegations of monumental corruption and abuse of the commonwealth. 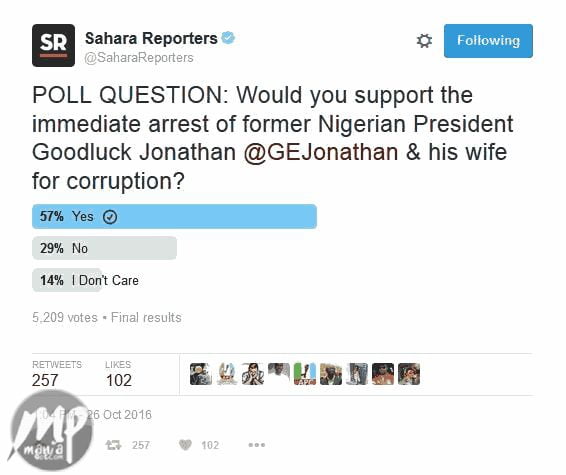 A recent poll organised by New York-based online news platform, Sahara Reporters, revealed majority of Nigerians want former President Goodluck Ebele Jonathan arrested alongside his wife – Patience Jonathan over allegation of sharp practices.
In the poll which started on the 26th of October and ended on the 27th, 57% of Nigerians wanted the People’s Democratic Party chieftains to be arrested immediately for prosecution while 29% of the voters voted NO.
14% of Nigerians expressed indifference about the opinion poll which attracted over 5,200 participants.
It would be recalled that pressure is mounting on President Muhammadu Buhari to swiftly arrest and prosecute Jonathan whose major allies are currently being probed by the Economic and Financial Crimes Commission, EFCC.

“The eagle in your logo is corrupt, stolen” – Twitter user tells…