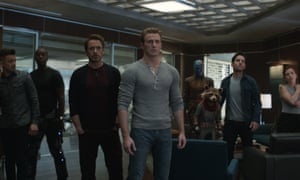 It’s only taken 11 years and 22 feature-length films, but the end of Marvel’s Avengers series is in sight. Sceptics might feel assailed by the 181-minute running time; a three-hour movie is the ultimate act of fan service. A pleasant surprise, then, those three hours zip by at lightspeed.

To recap: in 2018’s Avengers: Infinity War, evil Thanos (Josh Brolin) seized control of all six “infinity stones”, wiping out 50% of the Marvel Cinematic Universe and erasing many beloved characters from existence. Endgamepicks up in the aftermath, skipping ahead five years. Grief has softened some of the Avengers (Chris Hemsworth’s Thor has acquired a drinking problem and a beer belly) and calcified others (Jeremy Renner’s Hawkeye has taken up street fighting with petty criminals).

Franchise logic dictates that, in its final instalment, at least some of the vanished superheroes will return, but screenwriters Christopher Markus and Stephen McFeely are forced to figure out how to pull this off without simply pressing a giant reset button. The opportunity to rewrite history via a time machine (not a spoiler, but an inevitability) brings the gang back together again for one last mission. En route, we get flashbacks to earlier outings (2012’s The Avengers and 2013’s Thor: Dark World, for example); these bits are, quite transparently, for the superfans, but on balance, the film is more satisfying than an assemblage of meme-able moments designed to please the already initiated.

The variables of human emotion and fallible judgment are what drive the series; each character is haunted by their own, specific existential quandary. Who is Captain America (Chris Evans), once his optimism has been worn down? What of Tony Stark’s (Robert Downey Jr) cold logic now he is a father? Will Nebula’s (Karen Gillan) inherent humanity override her tampered wiring?

The final battle is giddily cathartic, but the catharsis arises from prioritising character development over plot and spectacle. This, I imagine, will be the Avengers’ legacy.

After starring in over 100 movies, Hollywood’s Billy…