New information has emerged on how the gallant Nigerian soldiers were able to successfully drive out the insurgent Boko Haram terrorists from Sambisa Forest. 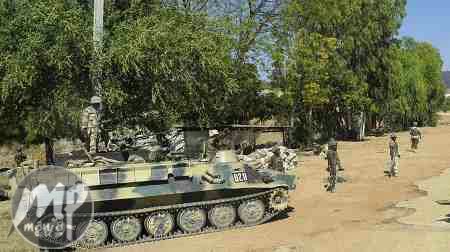 It has been revealed that no fewer than 4,200 officers of the Nigerian Army, Air Force and other special forces took part in the operation to uproot the Boko Haram terrorists from their Sambisa Forest bastion.

The revelation was made by some officers close to the operations who spoke to Daily Trust yesterday.

It will be recalled that President Muhammadu Buahari, yesterday broke the news of the capture of Boko Haram’s last stronghold in a goodwill message to soldiers of the Operation Lafiya Dole over the victory.

Buhari said he had received the long-awaited and most gratifying news of the final crushing of Boko Haram terrorists in their last enclave in Sambisa Forest.

The president said he was delighted at the news and was most proud of the gallant troops of the Nigerian Army.

“I want to use this opportunity to commend the determination, courage and resilience of troops of the Operation Lafiya Dole at finally entering and crushing the remnants of the Boko Haram insurgents at ‘Camp Zero’, which is located deep within the heart of Sambisa Forest.

“I was told by the Chief of Army Staff that the camp fell at 1:35pm on Thursday, December 22, and that the terrorists were on the run and no longer have a place to hide,” the president disclosed.

Daily Trust on Sunday reports that in the build-up to the operation to storm Sambisa, the United States donated five mine detecting armoured vehicles to the Nigerian Armed Forces, which enabled the military to clear “thousands of improvised explosive devices” that laced the vast Sambisa Forest.

Other powers like Germany also contributed “vital information and logistics” that led to the capture of the forest, sources said.

“The operation to took over Sambisa Forest did not start overnight,” one of the sources said.

Among other places, the Sambisa Forest had been used as fortress by the leader of the Boko Haram, Abubakar Shekau and members of the Shura (Supreme Council) since 2003, after they were dislodged from Maiduguri and environs, shortly after the declaration of state of emergency in Borno, Yobe and Adamawa states.

The source, a sniper, who returned to Maiduguri from the fringes of the liberated forest on Friday, said while hundreds of Boko Haram fighters were killed during the offensive that began about a month ago, many others were captured alive while attempting to flee.

He said: “A ‘white man’ was also arrested in the forest. The man is under custody and providing positive information.

“Hundreds of Boko Haram captives, including men, women and children have been freed and taken to safety.

“All I can tell you is that no big Boko Haram commander is alive in the Sambisa; we are in control of the forest.

“It took months of planning and mapping because of the size, difficult weather and other factors in the Sambisa Forest.”

According to Daily Trust, the source revealed that one of the major factors that delayed the takeover of the insurgents’ hideout was the thousands of people, including those living in villages around the vast forest that were being held as human shield by the Boko Haram leaders.

How the operation was carried out

It was gathered that the 4,200 troops were deployed to the Sambisa Forest through various fronts, including Ngurosoye, Konduga/Aulari, Bama, Fulka and Damboa.

He said the operation was carried out day and night.

“When mine detectors cleared the way, troops moved in to confront the insurgents, who were equally well armed with sophisticated fighting equipment.

“Luckily, we always had an edge over them at night because there were fighter jets with night vision devices that were deployed. And whenever the insurgents attempted to flee, there were B00by-traps in all the exit points, and we caught or killed them like chickens,” he said.

The political class, the military high command and the Nigerian soldiers celebrated the capture of the infamous ‘Camp Zero’ at the heart of the Sambisa forest.

The source said though the ‘Camp Zero’ comprised a cluster of dreaded camps and cells, the strongest and most fortified of all of them was a huge structure with underground cells and armory built for the disbanded National Guards in the 1980s.

“The building has about two layers of underground buildings. It was actually built by the military government in the 1980s for the training of the National Guards. Unfortunately, the place was left like that after the National Guards were disbanded.

“Therefore, after they were forced out of Maiduguri, the Boko Haram found the place as an excellent fortress because everything was there, including water, tunnels for escape and fertile land for farming,” a soldier familiar with the terrain, said.

The National Guard was established by a decree in 1989 by a former military president, Ibrahim Babangida, to combat crime and terrorism.

The Sambisa Forest stretches across six states in the North-East and North-West parts of Nigeria, including Borno, Yobe, Gombe, Bauchi, Jigawa and some parts of Kano state.

It got its name from the village of Sambisa in Gwoza Local Government Area of Borno State, which shares borders with the Republic of Cameroon.

In his message, President Buhari urged the troops to maintain the tempo by pursuing the terrorists and bringing them to justice.

He also called on all Nigerians to cooperate and support the Nigerian Armed Forces and other security agencies by providing useful information that would expose all the terrorists hiding among the populace.

The president said further efforts should be intensified to locate and free the remaining Chibok schoolgirls still in captivity, praying: “May God be with them.”

He congratulated and commended “the able leadership of the Nigerian Army in particular, and indeed, that of the Armed Forces in general, for making this possible.”

Buhari added: “This, no doubt, will go a long way in improving the security situation, not only in the North-East, but the country in general. But we must not let our guards down.

“Once more, congratulations to our troops and all, who, in one way or another, contributed to this most commendable and momentous effort. May the Almighty continue to be with you.

“I wish you a Merry Christmas and a most rewarding and peaceful Year 2017 ahead.”

Buhari’s statement did not say anything about the fate of the Boko Haram leader, Abubakar Shekau, who is suspected to be directing the activities of the group from his hideout in the 60,000square-kilometre forest.

The Nigerian security forces had, on many occasions in the past, claimed to have killed Shekau, who subsequently appeared in videos debunking such claims.