The Minister of Information and Culture, Alhaji Lai Mohammed, has enjoined the Indian Government to support Nigeria’s film industry, called Nollywood and Kannywood with the technology that will enhance the quality of films produced in the country. 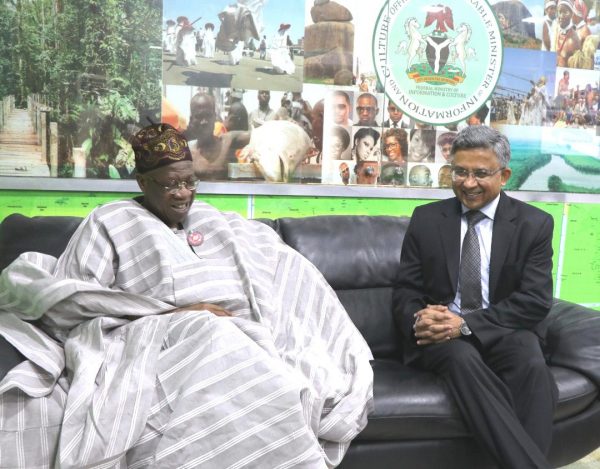 The Minister made the call in Abuja on Friday when he received the Indian High Commissioner to Nigeria, Mr. Abhay Thakur, on a courtesy visit to his office.

“I think Bollywood is probably the biggest film industry in the world, closely followed by Nigeria. But while we are proud of what Nollywood is doing in terms of content, I think we still need to do more in the area of technicality and technology and I think this in one area that I would want us to concentrate on in our bilateral relationship,” he said.

Alhaji Mohammed also urged India to extend its support to the area of capacity building for the lecturers of the Film Institute in Jos, in order to enable them to acquire the requisite and relevant knowledge, which will be imparted to the film makers.

“I want India to avail Nigeria of the opportunity to train not just our budding producers and film directors, cinematographers and the like but probably if India can stretch its hands of friendship to our Film Corporation, especially the Film College in Jos, so that they can be able to improve the technical quality of our films.

“I still believe that in the area of content, we have very rich content, very fecund imagination but I think in terms of the quality of the films, we still need to do much more and I don’t think there is a better place we can look forward to than India for this,” he said.

The Minister said in spite of the huge population of India, it still shares some similarities with Nigeria, particularly in the plurality of culture and religion.

He sought the assistance of India in the area of capacity building for Nigeria’s cultural officers, as well as the provision of scholarships for Nigerians in culture-related fields.

In his remarks, the Indian High Commissioner to Nigeria, Mr. Thakur, said in order to further deepen the ties between the two countries, the Indian Ministry of Foreign Affairs is organizing Journalists Exposure Visits for a select group of Nigerian journalists to expose Hide original message them to specific, Africa-focused business events in India

He also extended an invitation to Nigerian cultural troupes to participate in the India-Africa Cultural Festival, which is coming up in December, as a platform to showcase the cultural endowment of the country.

The High Commissioner, who said his country is enjoying a long-standing relationship with Nigeria, especially in the areas of trade, film, media and culture, disclosed that India is also organizing special events in the area of Performing Arts, music and painting.

He said over 50,000 Indians are currently residing in Nigeria, which he described as India’s biggest trading partner in Africa.

Ant Man: Paul Rudd’s kids are ‘excited’ he is in Marvel movies

“Nigerian music industry has so many deep dark secrets” – EldeeTheDon