Meet the Russian Kim Kardashian who thinks she is more beautiful

A curvy model has been dubbed ‘the Russian Kim Kardashian’ after sharing raunchy new images with her millions of followers to celebrate her 22nd birthday. 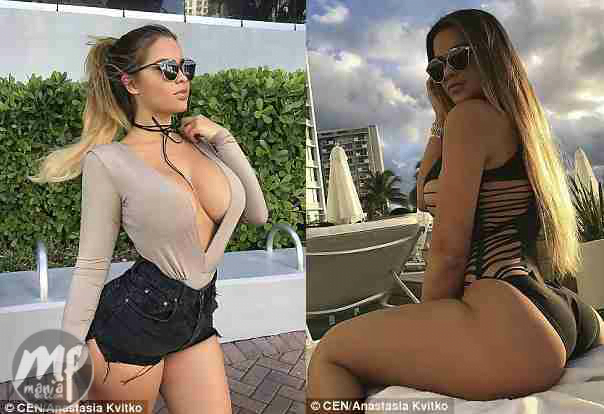 Anastasia Kvitko, shared photographs of herself wearing a highly-revealing swimsuit on social media where she has an incredible 4.9 million followers – but she has insisted she’s in fact better looking than Mrs West.

Kvitko has been accused of deliberately modelling herself on reality superstar Kim. But she has hit back, saying that she sees herself as ‘much better looking’, claiming that her body is completely natural and down to ‘hardwork at the gym’.

Kim Kardashian opens up on how her father, Robert influenced…

Anastasiya has previously criticised mother-of-two Kim, 35, claiming that Kim is ‘far behind’ her when it comes to beautiful derrieres.

“My body is sporty, my hip muscles are trained, my bottom is the most beautiful one, and I have not done any plastic surgeries on my face.

‘And she – everyone knows what she did to her bottom. Now my popularity is growing at a crazy speed, so it is a matter of time when I will be recognised more often than Kim.’

The Kardashians: Khloe’s daughter, True is…

Kim Kardashian baptises kids in her ancestral homeland in…