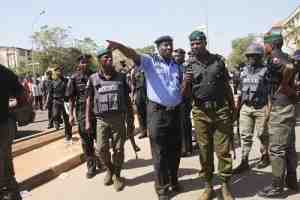 According to The Nation, the suspect claims to be a retired Army Colonel.

The command’s Spokesman, ASP Anjuguri Manzah, said the suspect was arrested on Oct. 18 in Maitama area of Abuja, following a tip-off.

“Police operatives attached to Maitama Division acting on a tip-off arrested one fake Colonel (name withheld) who claimed to be the Special Adviser to the President on Defence Matters,“Manzah said.

He said that the suspect, who specialised in defrauding influential people in the society, had gone to the area to meet up with an appointment with a former state governor.

The spokesman said that the suspect upon arrest confessed to the crime.
“He also confessed that he only hides under that guise to solicit for juicy contracts or financial favour from his high profile victims,“he said.

He said that one fake identification card and five complimentary cards were recovered from him. The suspect, who said he worked with the Bauchi State Government up to 1990, said he had been in the business for over three years.
“I thought it was an easy way to feed my family,“he said.

Manzah said that the suspect had been transferred to the Criminal Intelligence and Investigation Department for further investigation.

Oscar Pistorius Has Been Released From Prison