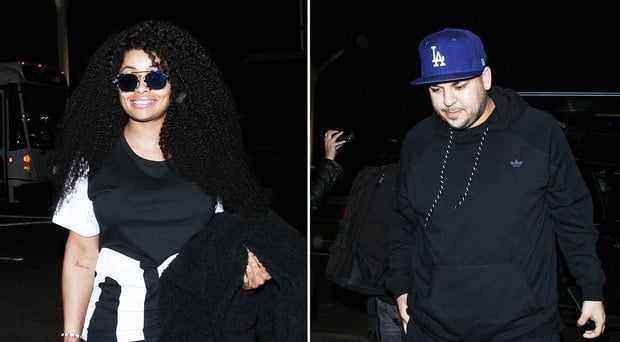 Kardashian, 28, looked a lot slimmer in black sweats and sandals as the couple headed off on their romantic getaway. “They both looked happy, but showed no signs of affection,” an eyewitness told Us.

Chyna, 27, initially revealed their destination on Snapchat, where the pair both posted a series of photos and videos documenting the plane ride. The model is set to appear at BritJam on Sunday; the week-long event is described on its Facebook page as the largest Spring Break Festival in the Caribbean.

Last week, Kardashian wiped his Instagram clean, and Chyna posted a quote referencing a breakup. Shortly afterwards, the reality star clarified that they were still together, writing on Instagram, “We just feel like it would be a lot healthier for our relationship if we kept a lot more to ourselves.” A source revealed to Usthat the “dramatic” duo had a fight, but confirmed that they didn’t officially split.

Kardashian and Chyna first revealed their relationship in January, much to the dismay of some members of the Kardashian-Jenner clan. A source close to the family previously told Us that Khloé Kardashian “feels majorly betrayed by Rob after she always stuck up for him. She feels like this is a major blow to the family. Nobody in the family likes it.”

Mike Tysons $1.5m Massive Vegas Home is Up for Sales