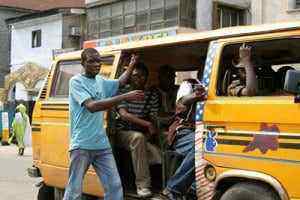 “Lagos is a fascinating place but every Lagosian knows that to survive, you must learn the language of the street. Some of the slangs are actually words of Yoruba origin but have been blended into everyday conversation so think twice before you say you’re not interested ‘vernacular’. Below top ten street expressions common in Lagos.”

1. Twale
Twale is an exclamation that is used to show respect to another person. In Lagos, saying Twale is accompanied by raising the two hands and raising a leg. That’s to show the person that you accord the person some respect. In dangerous situations, shouting twale can take you out of a dangerous situation.
Area boys are the king of the street. In difficult situations learning to speak like them can save your life.

2. Askari
Askari is another name for a policeman. That doesn’t mean when you see a policeman, you should call him that. It is rather usually used by people who probably want to warn that a police is around and so you need to be careful or disappear as the case may be.

3. Eja
Eja is the Yoruba word for fish. In this case however, the meaning is far from it. it is a slang for marijuana and is a very common euphemism employed by smokers. Therefore, you need to think twice before accepting an offer of Eja as it may not be Titus that the person is offering you.

4. Akube
If you see those guys and babes who parade themselves in ‘fitted tops’ and frayed jeans, don’t think they all do their shopping in those boutiques in Lagos. Some of them know that Katanguwa market is the place to get the best Akube. Akube is slang for grade 1 second-hand wears.

5. Yaba Left
If someone asks you if you’ve been to Yaba left or you plan to go there, the person is actually talking about the psychiatric hospital ay Yaba. The slang is used to mean you need to get your head checked probably because of something you did or said!

6. Radionic
Radionic sound like a word out of Merriam Webster dictionary and its used as a professional description of the person who repairs electronic appliances like television, radio, DVD, etc. Nobody cares what the real name is since Radionic has been adopted in Lagos as the professional name of the repairer of these appliances.

7. Agbero
That’s the name of the guy you see with his trouser hanging loosely around his waist as if he needs a belt. He might be brandishing a cane in one hand and holding a bottle of gin in the other hand. He probably has a deep baritone and his base is the bus-stop where he collects (or extort) money from commercial drivers. He probably has an NURTW ID but that doesn’t change who he is. He is an agbero and that’s what he does for a living. Please don’t call him that name though as you might be forced to see the stars in the afternoon.

8. Igbo/Aba Made
That’s slang for counterfeit or substandard goods. It however does not necessarily mean the product was made in Aba or produced by an Igbo person/company. Somehow, the name has been adopted by Lagosians probably because the Igbos have been known to be in the business of selling copy-cat products in Lagos. No seller will however tell you he is dealing in copy-cat products so don’t go to the market and say you needan Igbo-made shoe!

9. Aso-ebi
Aso-ebi is a Yoruba word that means ‘family cloth’ but its usage is beyond that. It means the cloth material that is made available to friends and families to use uniformly during an Owambe.

10. Owambe
That’s another name for a party, ceremony, function, etc where food and drinks are available aplenty. Owambe is a Yoruba word which loosely means ‘it’s there’. That means something wonderful or noteworthy is going on and you need to be there. Lagosians love the opportunity to flaunt the gorgeous aso-ebi and enjoy free meal. The next time you get an invitation to attend a wedding or burial ceremony, know it is going to happen there!